How to scale decision-making in your organization with Circles

Preparing your engineering teams for growth

As a leader in a growing organization, one of your primary goals is to build and develop your teams so they can move fast.

You need to be able to make good decisions quickly, and enable your team to turn decision outcomes into action.

But often, the larger an organization becomes, the fewer decisions are actually made, and the harder it gets to turn decisions into action. That’s because growing organizations face several challenges around decision-making:

Inevitably, decision-making is slowed down, overheads creep in, decisions are postponed, design happens by committee, and so on. Those decisions that are still taken are often not followed up on, either because people simply aren’t aware of them, they don’t feel affected, or they simply disagree because they didn’t have a say. As a result, the organization suffers from a lack of scalable decision-making.

In software engineering, we’ve learned that any centralized system will eventually hit hard limits and therefore fail to scale further. We can apply the basic techniques of distribution and decentralization to decision-making in organizations, just as we apply them to engineering. In order to scale decision-making within an organization, we can distribute and decentralize decision authority and execution accountability.

One method to achieve this is to install Circles (one of the patterns from Sociocracy 3.0). Circles are groups of five to nine people, coming from different disciplines, departments, teams, and organizational levels, who gather around a specific topic or area of expertise to make and drive forward important decisions. Circles are ‘overlays’ to any organization structure: circle membership is not a full-time role but rather something that members do next to their main duties in their line organization.

A Circle must be given decision-making authority from leadership. If a Circle is meant to be merely a place where people meet for coffee and discuss a topic informally without taking decisions and following up on them, it will fail to achieve scalable decision-making. 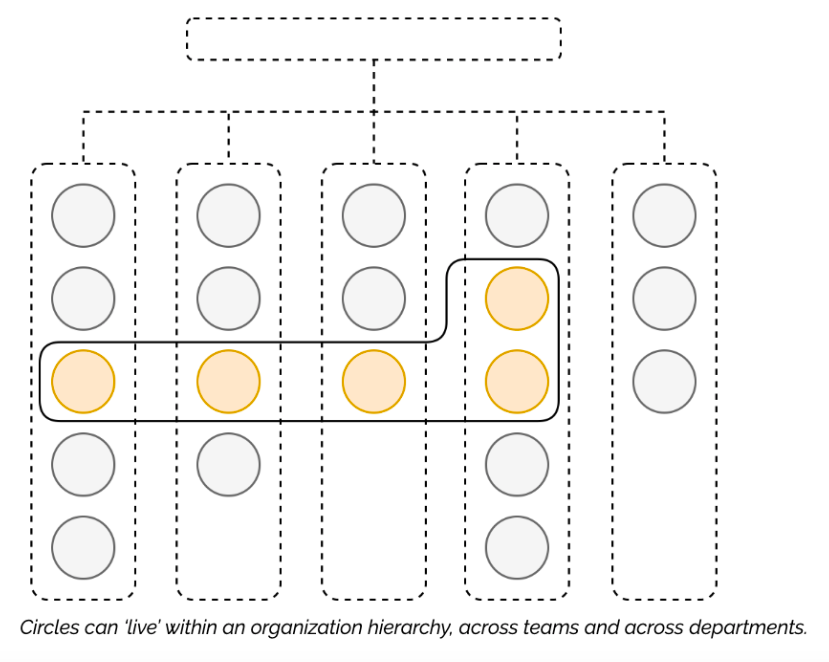 Which topics are suitable for Circles?

Some topics are more suitable for Circles than others. In my company, we’ve seen success with the following areas:

These are just three examples of Circles that will have an impact on decision-making and execution within an organization, if they are set up and run properly.

Now let’s take a look at what it takes to run Circles properly.

The six features of an effective Circle

For a Circle to be successful, it should follow some simple practical rules. Here are some important elements that your Circle should have:

Circles aren’t the only way to scale decision-making within a growing team, but they are a simple and effective solution for many of the issues larger organizations face. If you’re interested in establishing a Circle around a specific topic in your organization, gather the right people, provide clear guidance, give them decision-making authority, and let them get started. The chances are, it will have significant impact. Good luck!

How to drive decisions as an engineering leader

Andrea Heyman
8 mins
How to make a build vs. buy decision for a new software solution
17 Jun 2021 Article